Welcome to the very first edition of This month in rustsim. This monthly newsletter will provide you with a summary of important update that occurred within the rustsim community. This includes in particular updates about the nphysics, ncollide, nalgebra, and alga crate. This first posts will actually contain updates for the past two months, that is, since the creation of the rustsim github organization itself!

First and foremost new communication channel have been created:

Of course, you can still ask for help and provide feedbacks on the user forum: https://discourse.nphysics.org.

Significant work is being done to add support for deformable bodies to nphysics. Current developments are happening on the deformable branch. You can already see a few proofs of concept in the following videos:

To achieve this, features are being added to crates other than nphysics too:

We have created a new crate for linear algebra: nalgebra-glm. See its documentation there. It also has a dedicated page on the user guide.

This crate is actually built on top of nalgebra to provide an alternative API which is designed to look very much like the well-known C++ GLM library. The goal of this initiative is to provide to people that come from C++ an tool that looks like what they were already used to. Moreover, the API of nalgebra-glm can be simpler to grasp than the one from nalgebra for some users or newcomers that are more familiar with 4x4 matrices than with specific transformation types like Isometry3 or Similarity3.

With the transition of the amethyst game engine from cgmath to nalgebra, we have started collaborating with the amethyst community for making it simpler to integrate nphysics into an ECS-based application. This will be done within the nphysics-ecs crate (which is currently empty) with the precious help of Rhuagh and ldgoui.

You can refer to the dedicated issue. Contributions are welcome!

We are working on improving the rustdoc-generated documentation for all projects. First, we are starting with the nalgebra and nalgebra-glm crates. Our goal is to add # Example and # See also sections to all methods.

This has been started by waywardmonkeys on github, huge thanks to him) on nalgebra-glm crate; see for example the glm::lerp function there: 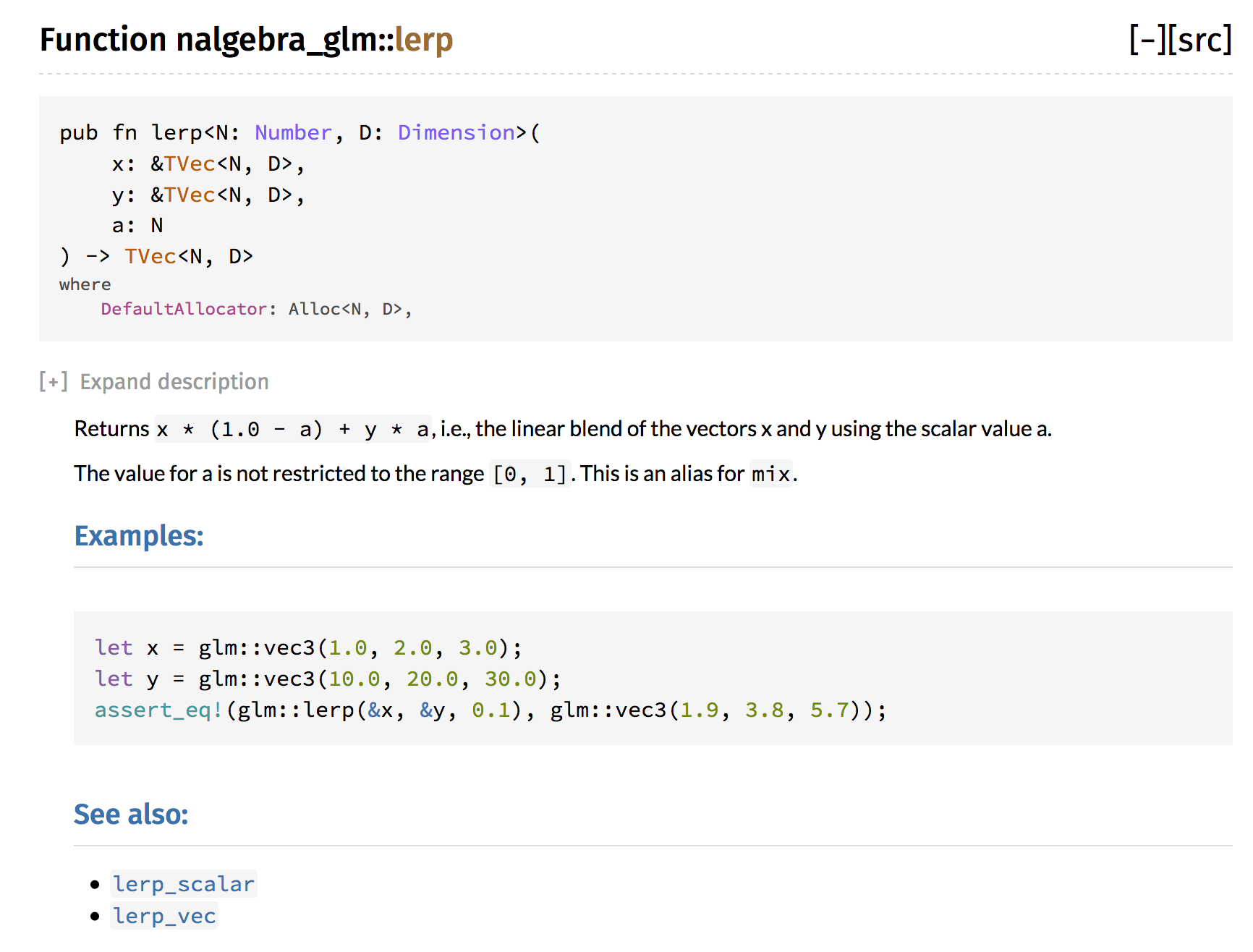 We have been working on doing the same on nalgebra itself. So far, we started on the addition of # Example sections to methods of geometric types. More will come in the future.

We would like to thank the whole community and contributors. In particular:

Finally, thanks to all the current and new patrons supporting this organization on patreon!